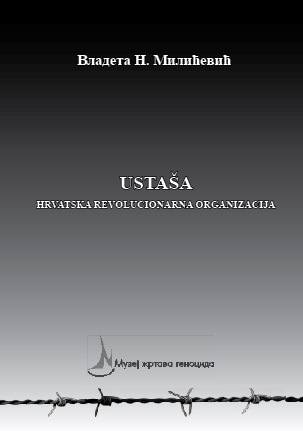 Museum of Genocide Victims is performing his publishing activities within the framework of the Law on establishing Museum of genocide victims, 1992. Considering that with the publication of archival materials we contribute to the clarification of certain previously unknown facts within the interpretations of particular historical persons and events, Museum has published collection of reports by Vladeta N. Milićević. Milićević, employee of the Ministry of Interior Affaris, was, for some time, part of the security detachment of King Aleksandar Karađorđević. Later, between 1934 until 1941, he was in charge of mission for monitoring Ustasha Croatian emigration in Italy.

Part of his reports on Ustasha are deposited at Archive of Yugoslavia, Ministry of Internal Affairs’ and Milan Stojadinović’s funds, and the rest of them, which were given to the communist authorities after his return to Yugoslavia, are most probably within the funds of Security Information Agency (BIA) – successor of former Yugoslav Office for State Security (SDB).

From available reports, 12 of them are selected and published by the editors – DrVeljkoĐurić Mišina, Director of Museum of Genocide Victims, and Dr Radovan Pilipović, Director of Archives of Serbian Orthodox Church. Only one report, last one in this publication, was previously published.