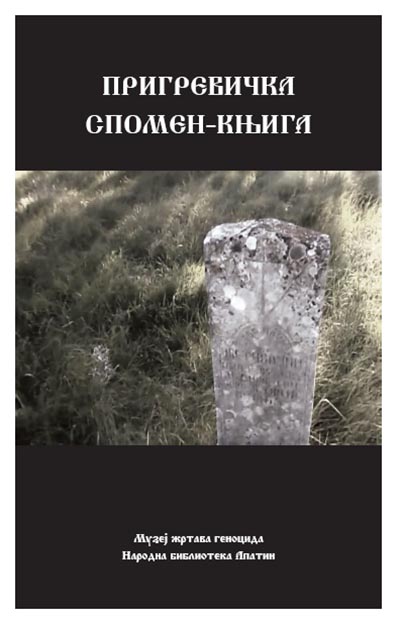 For years now, Museum of Genocide Victims presents its publications on 22nd of April, especially ones which are the product of cooperation with similar institutions. Also, Museum announces its plans for the next year. This year we have published “Memorial-book of Prigrevica” in cooperation with National Library “Miodrag Borisavljević“, from Apatin. Original manuscript was compiled in 1967 and its kept at Memorial-library of Prigrevica.

Actually, original Memorial-book is list of Serbs from Lika, Banija and Kordun killed between 1941 and 1945; list is accompanied by appropriate biographical information on each person and it is also printed on special paper and endowed with beautiful Cyrillic letters. List was created by the relatives of killed persons who were colonized in Prigrevica in 1947. Idea for its publication came from Ms. Branka Vejin, Director of the National Library. Photo-shoot of the original manuscript was done at National Library of Serbia.

Presentation of the book was done at congress hall of the Memorial-library in Prigrevica. Panelist were Ms. Branka Vejin, Dr. Veljko Đurić Mišina, Luka Mrkobrada and Bojan Arbutina, both of them research associates of the Museum. Members of Museum’s delegation at this event were Dr. Nenad Antonijević and Stefan Radojković, as well.

Guests were introduced with the latest volume of Yearbook for research of genocide as well, which was published on 22nd of April – day of Jasenovac inmates’ breakthrough in 1945.

Due to the fact that during the preparation for printing some factual errors within the list were detected, Museum charged historian Luka Arbutina to provide comparative analysis of all known data on victims from villages from Lika, Banija and Kordun in order for them to be cross-referenced with data from the Prigrevica Memoria-book. Results of his research will be presented in Prigrevica as well, on 21st October.